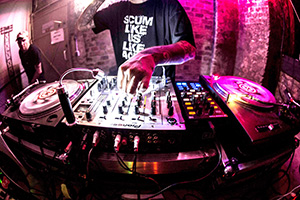 Skruff’s adventure trough electronic music started in the 1996, when, 16 years old, started going to his first rave parties in Italy, then, in 1999 went to London, and, in the Big City, started enjoiyng the Underground parties and got in touch more deeeply into dnb and acid techno music.

After 4 years spent in England, he went back to Italy in 2003, with lot of ideas, his first consolle and a bag full of vinyls.

In Italy started his activity with the Crustek sound system. This project brought him more deeply into the Italian rave scene, organizing free parties trough all the Peninsula, sharing the experience with lots of free tekno collectives.

In 2008 he left Crustek sound system and created, togheter with Dies Irae, The Big Fat Bass project!
I was a more close to the club culture project, due to the road that the Italian free party culture was running trough: poor music development (except few cases) and no real culture indeed.

In the last years his music tastes changed, from acid-techno, tribe-tekno and hard-tekno, he went deeply into breakbeat and dubstep, preferring deep and dirty basses instead of high BPMs, but in his bag you can still see some StayUpForever vinyls!

The intention of this new creature is to push young Italian and European producers focusing on old & new school underground electronic music. Open to all genres, such as techno, electro, breaks, dubstep, drum’n’bass, hard-tekno, x-overs and new stuff.

Blame Society intentions are also focused in promoting events all around Italy and the rest of Europe, if you want to be part of it, contact us!