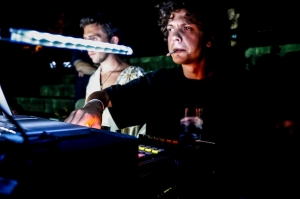 P3 is an Italian producer born in southern Italy.

Since his childhood he has had rhythm in his blood. At the age of 8 he started playing the piano and studying music.
His encounter with electronic music occurred during his adolescence.

On his 18th birthday, he moved to Rome and shortly afterwards started hanging out at a first free party around Europe where he discovered techno. Bewitched by this new music and by that magical atmosphere, his DNA changed with the sound of Spiral Tribe, becoming in turn the producer of this groove.

In 2005 he was one of the founders of the Ulver Kaos crew, whose purpose was to spread the underground culture through music and with whom he organized big events in Italy. In this period he produced his first vinyl hard techno, “Live 01”, mixed and mastered in the Quadraro Basement of Rome.

In 2011 there an evolution of his style came about, through the transition to breakbeat and electro.
Since the beginning his productions stand out in the European scene.

The feedback from other world-famous producers are several and always positive. His sound is quickly noticed by the labels, with which he started working.
2013 was a successful year:

He is currently working to produce news original mixes and remixes, for Shax Trax and other international labels.
P3 is a producer in constant evolution. His dirty bassline mood, ranges from hip hop to breakbeat, from techno to electro, passing through funky. A contamination of genres that creates an original and never boring style. His groove , that inflames the dance floor, has a clear techno tribe mark.
The dates of his tour that will take him around Europe are in continuous evolution…

Keep the groove… Look to the future!!!