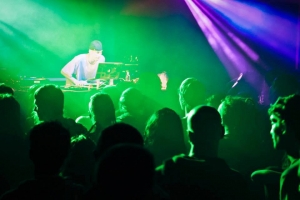 In 1998 with friends he started sound “against” system called Kernel Panik and travelled all around europe doing free parties and festivals, starting to play liveset around 2005.

They left for South America in 2006 and travelled around doing parties mostly in Argentina and Brazil until 2008.

Aswell as producing many mix tapes and CDs he has released tracks on Audiotrix, Hydrophonic records, Blame Society and also Kernel Panik’s own record Label.

The coproduction of Audiotrix 19 with Ixindamix in 2013 led to a new production and liveset project called “Don’t Panik!”

In recent years he has played at Big Rave Parties like BORDELL 23 and TEQUINOX PARTY organised by Kernel Panik but also clubs, festivals, street parades and squats all over Europe including Million Marjuana March, World/Gay pride and Glastonbury Festival in UK.