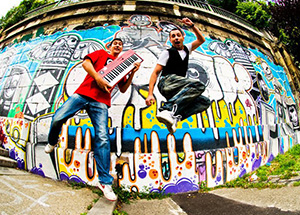 Fisso and Spark‘s paths first crossed in 2007, and from that spawned a studio partnership that saw them meld house, breaks and techno together and make it their mission to craft music that is giant in vibe.

In 2009 they proudly signed with Dead Famous Records with the well received single “You Are Right“, a raw number that brings out the emotions that dirty warehouse rave techno should. Taking inspiration from a great variety of styles they kept producing and remixing, specializing in breaky techno with great energy.

Andrea aka Fisso (right), born and raised in the city of Turin, was influenced early on by the hip hop culture of his town and in the middle of the 90’s started his musical journey, djing for some local hip hop crews. Tears later, after taking note of the sounds of acts like sound of the Prodigy, the Chemical Brothers and many others, he fell in love with electronic music. Together with his friends he co-founded the project, Crop Circle Unit, a collective of dj´s and producers, which in the early times organized free parties and later on developed in well known clubs and events all over Europe, playing alongside many international guests. For almost a decade, Fisso has been known for his impressive turntablism skills, and unique style when it comes to dj’ing.

Andy Spark (left) was born in 1975 in Vienna. He grew up with hip hop and electronic music and started to dj at the early age of 16, participating since the beginning of the techno movement that was storming Europe in the 90´s, Spark traveled around and organized free parties with Lego sound system. In the years to come, Andy started to play drum and bass, rocking the nights of some of the best locations around Vienna. Thanks to his great experiences he knows how to bring good vibes on every dancefloor.